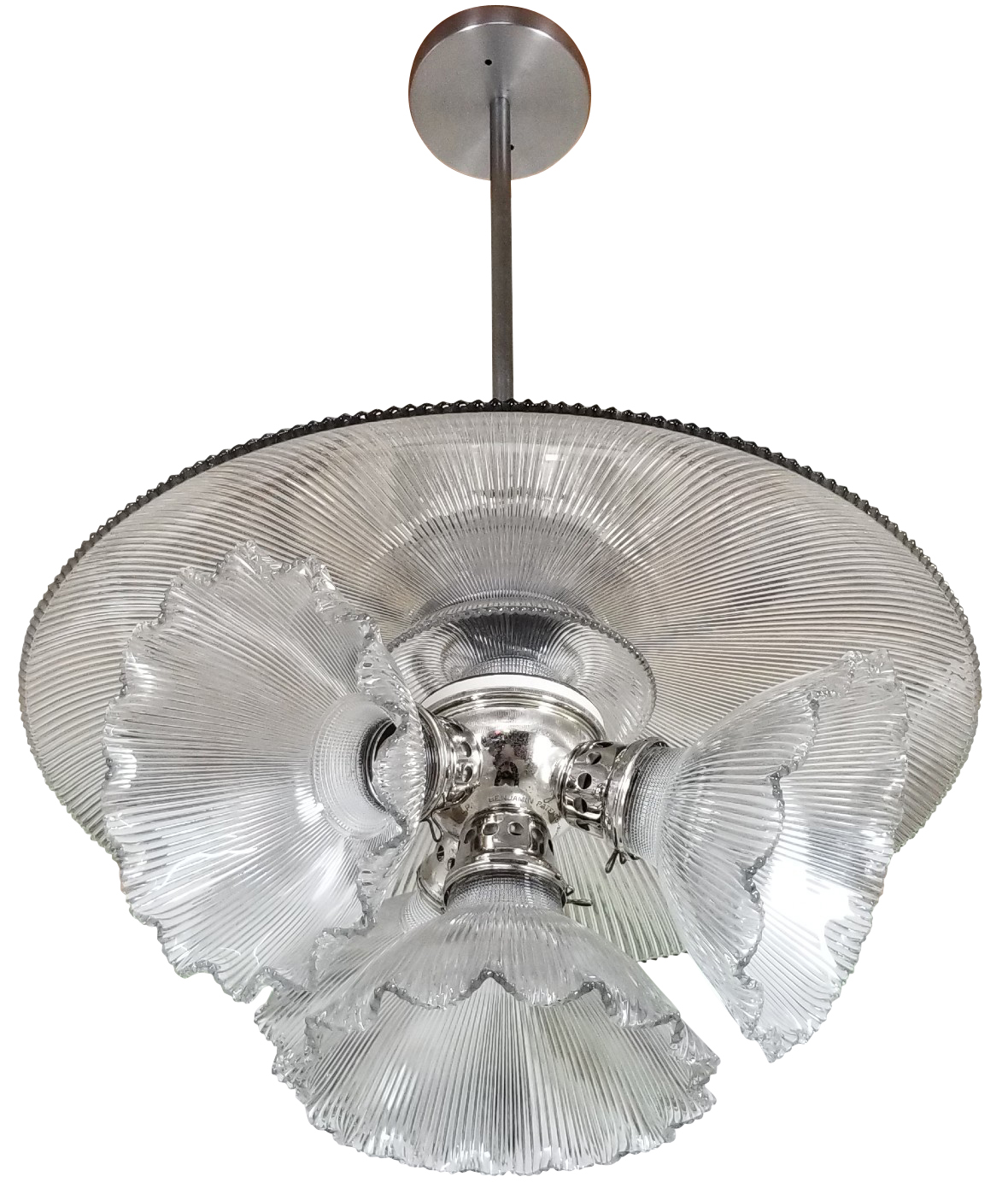 Absolutely Beautiful Original Ceiling Mounted Light Fixture Holophane Co. utilizing a Benjamin Electric Cluster.  This wonderful fixture has its original nickel plated cluster and shade holders, both still retain a beautiful finish.  The original Holophane shades are in excellent condition with no chips or cracks.  The fixture has been rewired using our superior OTR+W cloth covered wire.  The larger shade is suspended above the cluster using the original "sailor cap" transition spacer.  When found, this fixture was configured for an unconventional mounting so a new shade holder, downrod and ceiling canopy have been added for an updated appearance.  It is very rare to find one of these original fixtures still intact and is complimented by its amazing condition.

The fixture is comprised of componenets manufactured by two wonderful companies who became pioneers in the industry of Industrial Lighting.  Below is a brief history of each:

The official “founding” of the Benjamin Electric Manufacturing Company is sometimes aligned with the wireless cluster’s patent filing in 1898, but there was actually a three year gap before Benjamin was able to cobble together investors (and that high school workforce) in order to organize a proper company in 1901.

Putting up the $2,400 were a couple of fellow Iowa transplants—Walter D. Steele and Walter Clyde Jones, as well as Jones’ Chicago law associates Keene H. Addington and Curtis B. Camp. The investment, needless to say, was a wise one.

By 1904, the Benjamin Electric MFG Co. had its own facility at 42 W. Jackson Blvd (after street number changes, this is essentially where Union Station is today), with 19 workers making wireless clusters. Just four years later, that workforce had exploded to 174 men and women, producing a wider assortment of “electric goods.” Company offices were also established in New York and San Francisco to keep up with growing national demand, and international factories were opened in Toronto, Ontario, and London, England. It was a rapid rise to worldwide recognition.

The term "Holophane" is used generically to describe clear molded glass or crystal shades and globes with parallel or crosscut prisms. Vintage Holophanes (circa 1890s-1950s) are outstanding examples of mid-twentieth century industrial art. The crisp clean lines create a beautiful glow when illuminated. Holophane glass was invented in the 1890s and was made in many shapes, sizes and patterns to provide specific types of illumination.  The term "Prismatic" is an alternative term for Holophane glass. Holophane glass is a beautiful choice for industrial lighting.

The name Holophane was coined by French scientist Andre Bondel and Turkish born engineer, Spiridion Psaroudaki in the 1890s for their newly invented glass. They described the glass in the 1896 US patent #563,836 as having a "luminous appearance over its entire surface... entirely shining," and "having great beauty as well as illuminating power." According to the Holophane Company's website, the term was "derived from the Greek word 'Halos' meaning whole or entire and 'Phanein' meaning to appear or to seem. Thus the word 'Holophane' was defined as to appear completely luminous."

This highly engineered glass was initially made in France in the 1890s. The glass was designed with parallel prisms or ribs on the interior and exterior in order to refract and reflect light, thereby preventing the absorption of light. The engineering provided optimal illumination with little glare. The greater amount of lead used in older glass provided sparkle and life. The glass was originally made for both gas and electric illumination. During the dim gas/electric era in which Holophanes were invented, they were truly state-of-the-art performance lighting.

Made in Chicago Museum 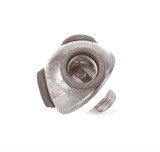 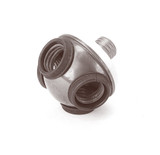