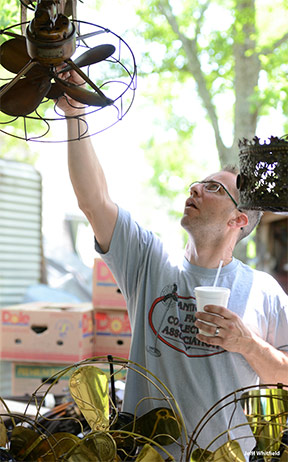 My story is very similar to most, I stumbled upon an electric fan at a sale and found it interesting.  I purchased this new adventure and took it home and began to inspect this unique fan.  This was in 1995, there was no internet so all knowledge was gained from the fan collector newsletters and from the “old timers” via the telephone or fan meets.  When you begin to inspect and disassemble one of these pieces of history you become intrigued about their workings and that sets the spark afire.

So the collection has begun…..  There was nothing to stop this new found passion in the beginning; any fan I found was coming home.  One quickly led to 300 in a short time.  Along the way I would find fans that were missing parts and pieces and the thrill was to find those parts and make this piece of history operational again.  So collecting Antique Electric Fans became a passion of mine and still remains so today.  In 2007 I left my full time employment to pursue another passion of mine Mid Century Modern Furnishings.  This also allowed time for trips to the National Fan Meets and to acquire more fans.

In 2013 there was an opportunity to acquire a large collection of fan parts from a well known collector in St Louis MO, he was also the owner of an electric shop called South Side Electric.  Being this motor/fan shop was located in St Louis MO (the home of Emerson Electric) this place was full of Emerson Fan parts.  This was no small task of getting all this cast iron back to North Carolina but with the help of a very generous collector it arrived safely.

In 2015 another opportunity was presented to acquire a collection of fans 42 years in the making.  When fan guys get bit by the bug its tough!!!!  Based on the experience in 2013 I sorta knew what I was up against.  But then again can you ever get too many?

So these acquisitions led me to create Antique Fan Parts.com.  From these collections come a huge amount of original fan parts that collectors are in need of to complete their new finds,  That is the fun right, making that piece of history operate again and what better way then with period correct parts?

Believe it or not, Im always in the market to acquire one fan or a large collection so please let me know if you have anything that you want to sell.