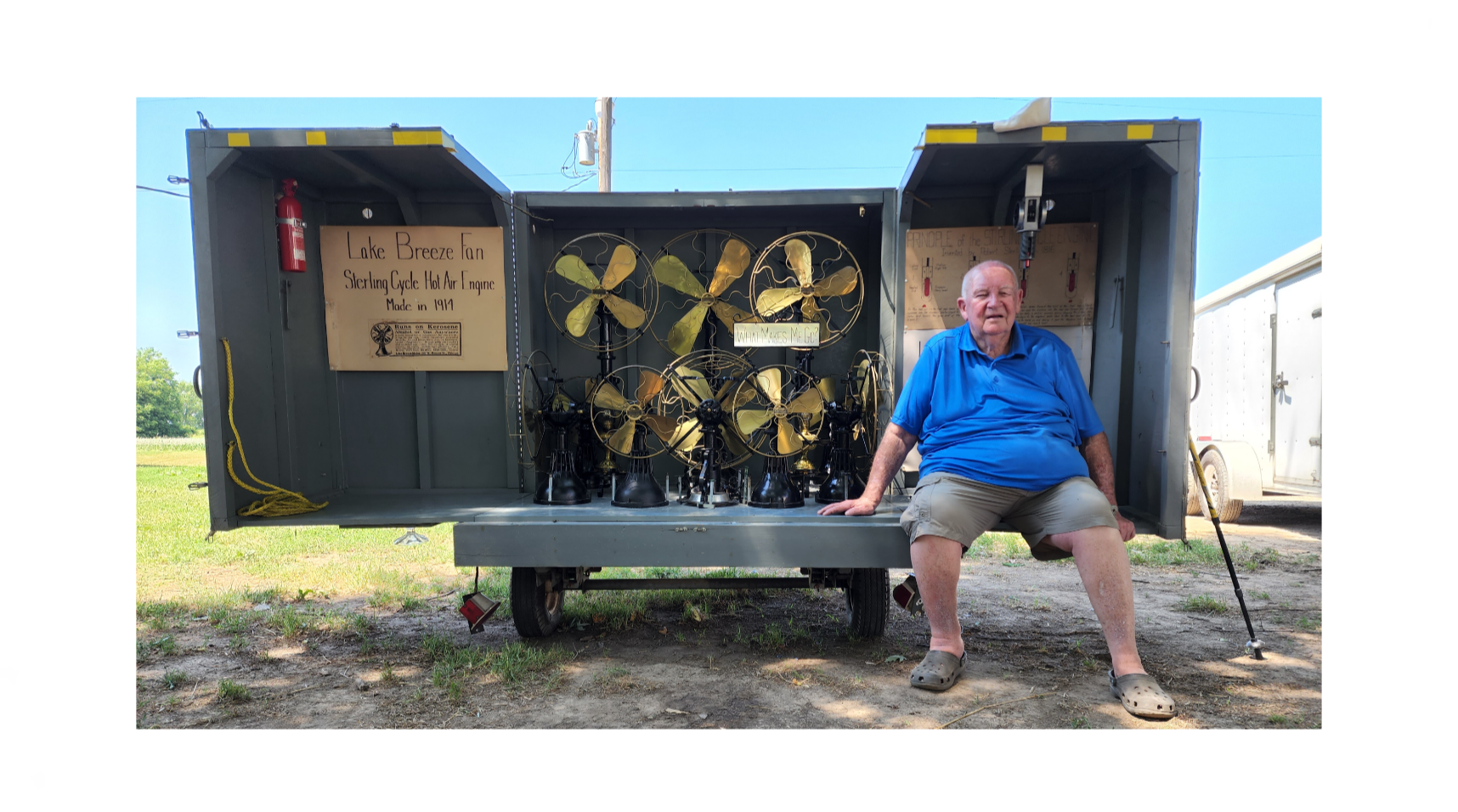 As a young man, James Fogle became interested in gas engines while growing up on a farm in Peculiar Missouri. Early gas engines were used in many aspects of the farm and James found himself acquiring these and attending antique Tractor and Engine shows. While attending one such event, James remembered seeing "one of these fans". Like many of us, it only took that first one and he became hooked. This was in the 1970's and James started attending local Farm Auctions and Door Knocking to acquire this amazing collection. Several of the fans in his collection were acquired from a neighbor or family member from whom he had purchased a fan. He recalled the fans would always bring more at an auction than a gas engine. As the collection began to grow, James wanted to devise a way to "Take the show on the road". He engineered this wonderful transport/display trailer to safely take his collection to the Tractor and Engine meets where his love for these machines began. I asked him how many miles he felt were on the trailer and he said "Not many". In 1992 the trailer was locked and safely stored on the family farm until 2022 when I acquired it and it made its longest voyage to Fan Fair 2022 in Springfield Mo. This trailer and its collection contain a wonderful history on the LakeBreeze models as well as "How the Sterling Engine Operates". With most attendees at these events having little to no exposure to these machines, James had some fun with just "How Do I Run". Built into the trailer was a holder for a glass cake plate, James would set a LakeBreeze fan atop the plate and display it in operation. This would demonstrate the true Magic of the fans operation! He even recalled using an electric cord plugged into the ground, a real mystery on the fan's operation. I can only imagine the education this collection provided (pre Internet).Not just a Lake Breeze Fan Collector, James worked for the Telephone Co. as a Cable Splicer/Repair Man. He has Bicycled across the USA, not once but twice. He told me the second trip came to an end on the outerbanks of NC on 09/11. The original plan was to fly back to Missouri but air travel was canceled and he decided to take his time and cycle back to Missouri. While on the east coast, he rode to Washington DC and recalled it being vacant. He is full of many wonderful stories about his many miles of cycling across the country and feels "there is no better way to see it". James has also battled 4 different cancers. While battling cancer he needed something to "take his mind off of it". He decided to "build a boat". James built a canal boat but decided a canal was too small of a feet for his boat. James set out in his Canal boat traveling from S. Dakota to New Orleans and Kansas City to Minneapolis St. Paul on major rivers occupied by barges and large ships. A truly inspiring story of how a collection was acquired and a life that has been lived to its fullest.