Link to The Story Behind OTR+W 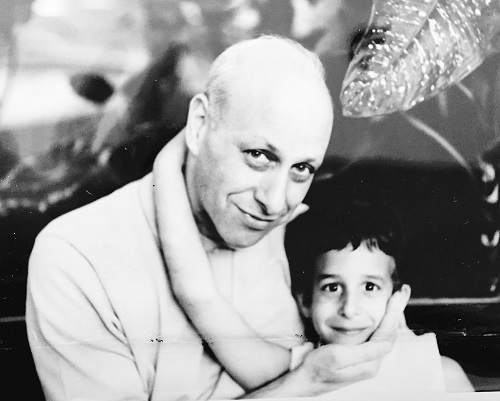 Included in this affectionate photo is Howard Granoff and his daughter Andrea.  Howard, was the founder of Olde Tyme Radio and designer/creator of wire products at Olde Tyme Radio plus Wire (known as OTR+W).

Andrea estimates her dad started Olde Tyme Radio in 1975.  She shared that her dad spent the majority of his teen years “tinkering” - building radios and fixing TVs.  As a young adult he enlisted in the Army signal corps during WWII.  Howard spent the majority of his career working for National Oceanic and Atmospheric Administration (NOAA) on weather radars.  Upon retirement his attention turned to radios.  Howard was highly respected and over the course of his life he had customers around the world and was very well known for his skill and business ethics.  In 1986, Howard began developing wire and expanded Olde Tyme Radio to include wire and renamed the business OTR+W.  Howard discovered that there was a market for wire, and designed very specific, very flexible wire that would fulfill the historic aesthetic of fan collectors.  Fan collectors quickly realized OTR+W’s wire was pliable and easy to work with in the confined space of a fan motor.  In 2003, when Howard passed, Andrea carried on OTR+W’s wire division as a way to honor her dad.  Andrea recalls “I got to speak with some wonderful folks in the fan community, who were very patient and understanding of the fact that I had a full time career outside of wire.”  In 2017 the opportunity to purchase OTR+W presented itself.  I felt it was the perfect match.  Howard’s love for radios is similar to my love for fans and I am humbled by the opportunity to provide OTR+W’s ideal wire to the fan community.