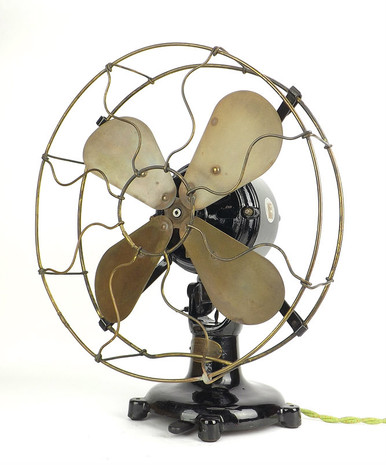 This fan was manufactured by The Colonial Fan & Motor Co in Warren Oh and was sold by James Clark Company in Louisville KY.  The fan is what collectors refer to as a Colonial "Tab Base" Desk Fan.  To me what makes this fan really special is the original James Clark decal on the side of the motor.  Around the turn of the century retailers began sticking their logo on fans and these examples are very hard to find.  As you can see the decals were thin and certainly not intended to still be around 100 years later.  The paint on this fan is original and has been cleaned and waxed to reveal an incredible shine.  At the time we found the fan, the motor would not run and appeared to have an opening in the winding.  We had the motor rewound to run as it should when new.  This may have been what saved the fan from many years of use and abuse.  An excellent example of a very collectible fan.

This product hasn't received any reviews yet. Be the first to review this product!